Opponents of the city proposal say closing parks is not the answer when better enforcement and maintenance is needed.

Faced with complaints of illegal drug use, unpermitted camping, and public urination in a Honolulu park, City Council members are moving to close it.

“Because this location has become a site frequented by people who are homeless and (experience) drug addition and those kinds of issues, it’s a sore spot,” said Councilwoman Carol Fukunaga, the resolution sponsor. “We would prefer to see this area used for purposes other than parks.” 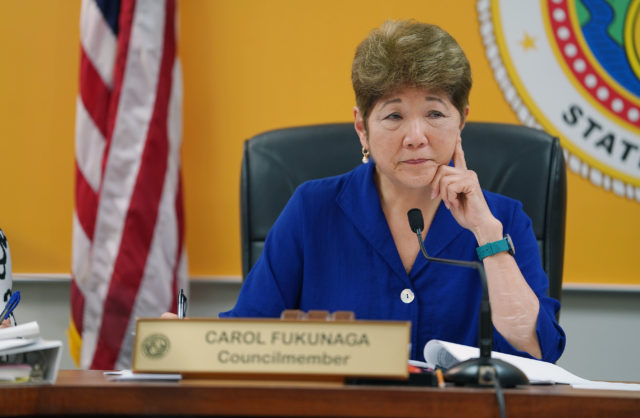 The park is “underutilized by the community,” according to the resolution. And its concrete planters and dividers “appear to provide cover for illegal activity and support for illegal camping structures,” the resolution states.

The police department, parks and recreation department and fire department have tried to address problems with park cleanups and enforcement actions, the resolution states, but those efforts result in only temporary relief.

“Non-park uses, such as expansion of the adjacent fire station, could eliminate the opportunity to use the space for illegal activity, and could contribute to substantial savings in city resources and manpower,” the resolutions states.

The nearby association of apartment owners supports the measure, Fukunaga said, and so does the city parks department. Assistant Fire Chief Socrates Bratakos also testified in support.

One person spoke in opposition to the measure.

“We would like to look more deeply at this because we’re seeing this pattern across the city where we don’t have enough resources for our parks, so therefore the answer is to close them early, to shut all people off from using the park,” said Winston Welch, executive director of The Outdoor Circle, a nonprofit that advocates for green spaces.

Welch said his group sympathizes with the city’s problems, but that closing the park is not the answer. The city should instead make the park a showcase that welcomes people to downtown Honolulu.

“It should be a place of beauty,” he said. “Instead, we’re closing it because we’re not having maintenance and enforcement of existing laws. That’s just a sad indictment of the city right now.”

Honolulu council members are also considering Bill 52 which would allow the city parks director to close parks at night.

Under the proposal, introduced by Councilwoman Kymberly Pine, it would be illegal to enter a closed park, and violators could face penalties of up to $500 and/or imprisonment of up to 30 days.