On Tuesday, the council’s Executive Matters and Legal Affairs Committee, which Menor chairs, met behind closed doors to consider allowing the private firm Farella Braun & Martel to represent city employees in the rail matter, but rejected the idea.

The city’s corporation counsel felt the California firm’s expertise would be vital should the federal investigation into rail expand past the Honolulu Authority for Rapid Transportation, Menor said.

The semi-autonomous agency, which oversees rail construction for the city, was hit with three federal Grand Jury subpoenas in February. An unspecified number of HART employees have also received individual subpoenas since then.

“We need to anticipate that their investigation will entail attempting to obtain additional information about the rail project from city employees and personnel,” Menor said. “And so this request for information could come by way of federal subpoenas as well as requests on the part of federal prosecutors to interview city employees and personnel.” 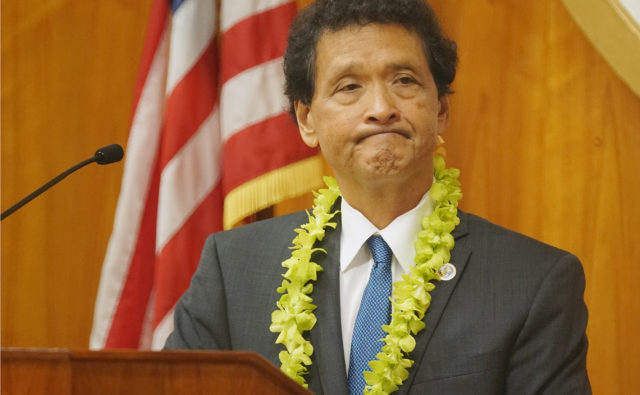 Nonetheless, council members shot down the proposal to retain Farella Braun & Martel with a 4-3 vote. The move would have retained the firm’s services for $50,000, according to Menor.

Now, he said, some city employees might eventually have to seek their own legal representation, similar to staffers at HART impacted by the probe.

The corporation counsel department has said it lacks the in-house expertise to deal with the criminal investigation, responding to any subpoenas or interview requests, according to Menor.

Thus, the department hoped to retain Farella Braun & Martell for its “expertise in criminal matters to ensure that federal investigators don’t overreach, or conduct their investigation in an overly broad fashion,” the councilman added.

It’s the same law firm the city hired in January to limit the disclosure of documents seized under a search warrant by federal officials investigating the Kealoha corruption scandal.

That month, Honolulu Mayor Kirk Caldwell announced that Corporation Counsel Donna Leong had received a target letter from the FBI as part of the Kealoha corruption probe. She remains on paid leave.

Paul Aoki, who’s served as the city’s acting corporation counsel ever since, did not respond to a request for comment Tuesday after the council’s committee meeting.

During the closed-door briefing corporation counsel officials said Farella Braun & Martell’s work “was favorable to the city,” Menor said. It helped the city obtain a sealed District Court order to limit the documents federal authorities could seize under search warrants served to the Department of Information Technology as well as Budget and Fiscal Services, he added.

In an email Tuesday, Caldwell spokesman Andrew Pereira said he’s not aware of any city employees receiving rail-related subpoenas other than those already sent to HART.

Rail Employees Already On Their Own

The move to hire attorneys to represent city employees in the rail probe follows a similar failed attempt to hire lawyers for HART employees.

Committee members were split 4-4 and the matter did not advance to a full council vote. As a result, HART employees facing subpoenas in the investigation will have to hire their own lawyers, HART Executive Director Andrew Robbins said last month.

“The corporation counsel is still available — whatever help they can provide,” Robbins said after a Sept. 5 agency meeting, “but we certainly encouraged the employees to reach out to private attorneys if they so felt they should.”

“Some of them even suggested maybe they could bring a friend (for support at interviews), and I guess that would be up to the prosecutors,” he added. “We didn’t know how to advise them on that. I think it’s fair to say the employees were disappointed with the council action.”

“We’re going to comply as much as we can.” – Damien Kim, former HART board chairman

Taken together, federal investigators’ orders for information from HART have been broad, covering multiple aspects of the rail project.

The first sweeping order required thousands of pages from the agency’s records on design, planning and construction work, as well as correspondence on the city’s rail-funding deal with the Federal Transit Administration. The second one called for files on HART’s relocation payments to property owners along the line.

To comply, the agency provided four terabytes of documents to the feds, Robbins said.

The third subpoena — aimed directly at HART’s board — has proven much more complicated. It demands a full and unredacted record of the board’s closed-door meetings, and there’s no exception listed for discussions that might fall under attorney-client privilege.

“We’re going to comply as much as we can,” former HART board chairman Damien Kim said in February when the subpoena was served.

The goal in retaining Farella Braun & Martel was to ensure “there is not going to be any overreach that will enable them to conduct a fishing expedition or to do an investigation that is overly broad,” if the rail probes reach Honolulu Hale, Menor said Tuesday.

That said, “we want to cooperate with the federal investigation,” he added. “We want to turn over…any and all information that is relevant to their investigation” into “whether any wrongdoing was committed by any city official.”