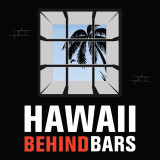 The state is pushing forward with the roughly $525 million plan to move the Oahu jail from Kalihi to the Animal Quarantine Station site in Halawa, clearing the way for development along the rail route.

But there’s still no money for it, and many prison reform advocates say simply moving the Oahu Community Correctional Center closer to the prison at Halawa is a bad idea.

The state is seeking approval from the city for construction of the new prison complex, which includes a 1,044-bed men’s detention center.

But the city is deferring making a decision, saying it needs more time, and the planning department says in its review that the state must make funding and project delivery decisions before construction can begin.

“For many reasons, seeking a specific amount of funding and from a specific source is premature,” said Toni Schwartz, spokeswoman fo the Department of Public Safety, which oversees jails and prisons.

The project is evolving and the next phase will establish the specifics of the size, configurations and functions of the spaces of the proposed facility, which could change the amount, she added.

OCCC, located in the Kalihi neighborhood since the 1910s, has long suffered from inmate overcrowding. 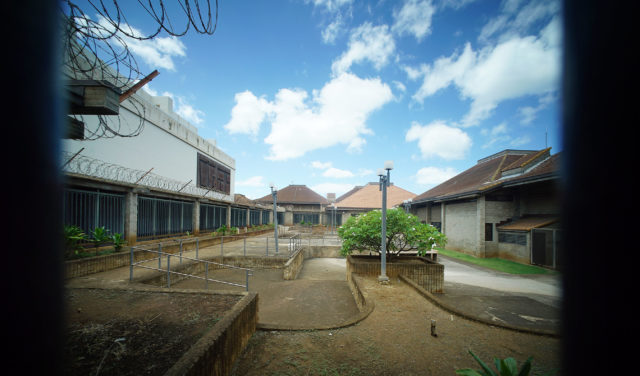 The facility is also in significant disrepair. Its oldest structure — the high custody housing unit — dates back to 1912, and some security systems still being used there are 40 years old, according to the public safety department’s environmental impact statement. It’s been sued over what civil rights attorneys called “inhumane conditions.”

Citing these reasons, Hawaii Gov. David Ige has made relocating OCCC to a 29-acre site at the state Animal Quarantine Station in Halawa Valley one of his top priorities. Moving the jail there from where it is now would also “reposition Kalihi for the future, when the land along the rail route will be used for new economic development,” he said in 2018.

Ige and his public safety director Nolan Espinda’s vision for the new complex in the Halawa and Aiea area includes a four-story detention center that also has special needs and acute mental health housing — services that OCCC does not currently have but needs. This new complex would also have a separate two-story prerelease facility that can accommodate 288 beds. 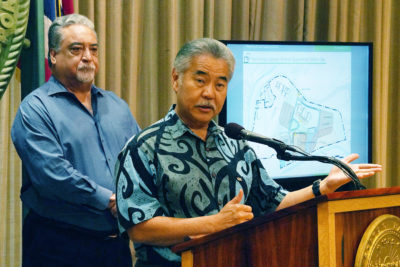 In 2016, the state sought to fund the project through a proposal to sell general obligation bonds, but the Legislature rejected that measure. The next year, some legislators tried to stop the process by introducing bills that would suspend consultants’ work on the project or provide alternatives.

There were also talks of exploring public-private partnerships earlier this year.  CoreCivic, the private prison contractor formerly known as Corrections Corporations of America that operates the Saguaro Correctional Center in Arizona that houses Hawai prisoners, was seen as a prime candidate to build a prison that would be leased back to the state, but nothing has come of that idea so far.

Although no money has been allocated for moving OCCC, a lot of work has already been done, some of which involves outside contractors, including Architects Hawaii, and Louis Berger Group. 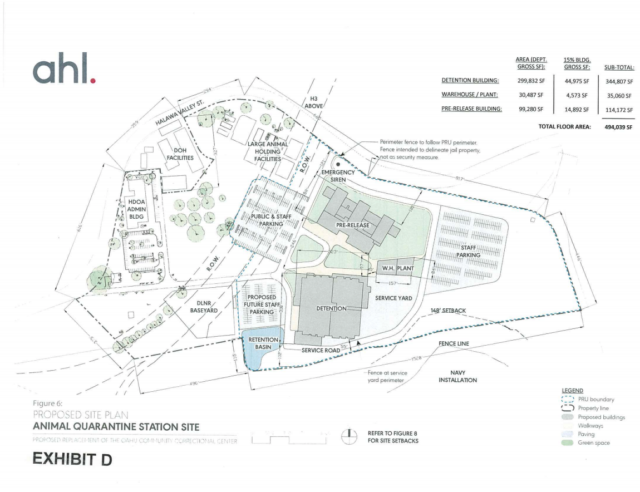 Is A Big New Jail The Best Way To Go?

Bob Merce, vice chair of the legislative prison reform task force that recommended that the state halt its plans to build a new Oahu jail, has been advocating for the state to stop the planning process for years.

“We should take a step back, take a deep breath and think about it creatively,” he said. “And we can make some real head-way and make the community safe while saving literally hundreds of millions of dollars.”

He said he thinks a new jail is absolutely necessary, but not one that’s as big as the state wants. If the state addressed the problems of mentally ill, homeless and low income people repeatedly ending up in jail and overcrowding the system, that would eliminate the need for a huge new facility, he added.

But the state government isn’t the one incarcerating people, says Cindy McMillan, a spokeswoman for Ige.

“The state is obligated to follow the court’s direction when it comes to detaining and incarcerating individuals,” she notes. 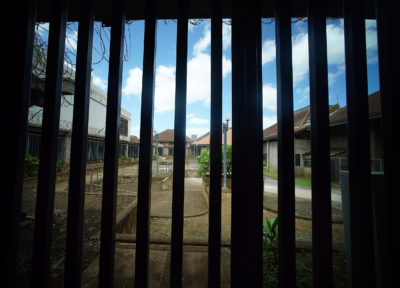 “The jails are extremely overcrowded, and we welcome consideration of any initiatives that would help reduce jail and prison populations while balancing the need to maintain the safety and security of our community,” McMillan said.

The important thing, she said, is that the environmental work has already been done. The next stage is to solicit proposals from bidders for design, build and finance of a facility.

The state is also considering other alternatives, including purchasing the Honolulu Federal Detention Center as a replacement facility for OCCC, she said. That idea was already introduced and shot down in the Legislature this past session.

In July, the Honolulu City Council granted a 120-day extension on the resolution to approve the state’s plan. Council member Ron Menor, who chairs the city’s zoning and planning committee, said the council needed more time because Aiea neighborhood board members and their council member, Carol Fukunaga, wanted to talk more about it.

“Many questions raised by board members and community stakeholders have not received adequate responses,” Fukunaga said in a letter to Vincent Shigekuni, a senior vice president of PBR Hawaii, a consulting firm for the OCCC relocation project. 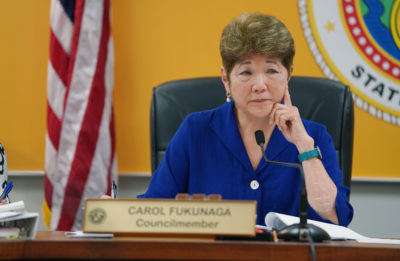 There was no formal presentation that adequately discusses the full scope of the project, she added.

So Fukunaga had a list of questions in the letter, including about transportation and traffic issues, the impact on businesses and public safety, mitigation measures, and the details of the possible public-private financing partnership.

State Rep. Aaron Ling Johanson also wrote to Menor opposing the relocation, noting other  Aiea community members are against it as well.

He also pointed out that the Legislature has not approved or appropriated any funding for the project. “Therefore, the Department of Accounting and General Services’ pursuit of approvals seems premature,” he added.

Civil Beat reached out to the Aiea Community Association, which has also written letters to the public safety department in opposition. A representative did not return calls for comment for this story.

In its review of the state’s application for permit, the city’s Department of Planning and Permitting said there are a lot of things that need to be done before construction can start, including making decisions on funding and project delivery, consolidating individual parcels, and transferring control of parcels from multiple agencies. 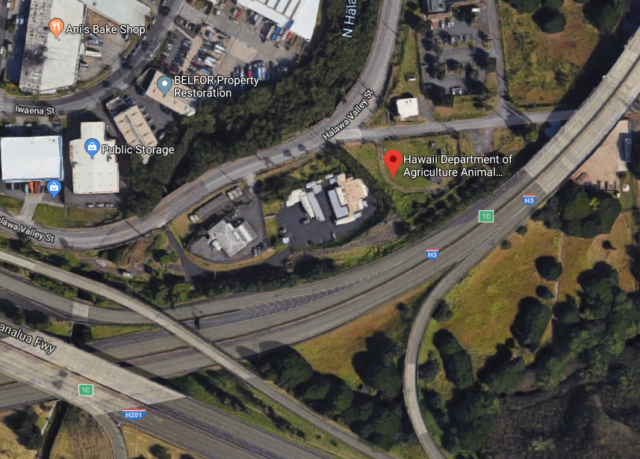 When all of those matters are resolved, the existing Animal Quarantine Station can be relocated, buildings demolished and new sites can be developed. Some existing structures that need to be demolished include about 255,000 square feet of animal kennels, most of which aren’t being used, according to city documents.

The construction would also displace other tenants, including the U.S. Customs and Border Patrol’s Dog Detection Unit, the state Sheriff Division’s Canine Unit and the Department of Health’s Environmental Health Services Division.

“The proposed project will maintain the existing character of the neighborhood in terms of land use and urban design, and will provide important facilities and services to the community and public overall,” she wrote in her conclusion.

The state is missing the point in trying to build a new prison complex, said Anna Mayes, a criminal justice reform advocate. She has worked with Renwick “Uncle Joe” Tassill, the late Native Hawaiian advocate, to create a wellness center for nonviolent offenders of Native Hawaiian ancestry.

The conversation shouldn’t be about a building, but the people inside it, she said. The investment should go into “rehabilitation of people and away from construction,” she added.

Mayes said building any new jail structure would just add to the problem of mass incarceration. But the state needs to first ask itself another question.

“How are they safely and humanely incarcerating people?” she said. “That’s two different discussions.”