The city’s top attorney has gone on leave after being notified by federal prosecutors that she is a target in an ongoing, years-long corruption probe that has already led to indictments against the former Honolulu police chief and his wife, a former deputy prosecuting attorney.

Mayor Kirk Caldwell said he and the administration’s top attorney, Corporation Counsel Donna Leong, had mutually agreed that Leong would take a leave of absence with pay to avoid any distraction that could be brought by the target letter.

“A target letter must be taken very seriously; we take it seriously,” Caldwell said at a press conference in his office Monday afternoon. “At the same time, I believe Donna is entitled to a presumption of innocence.” 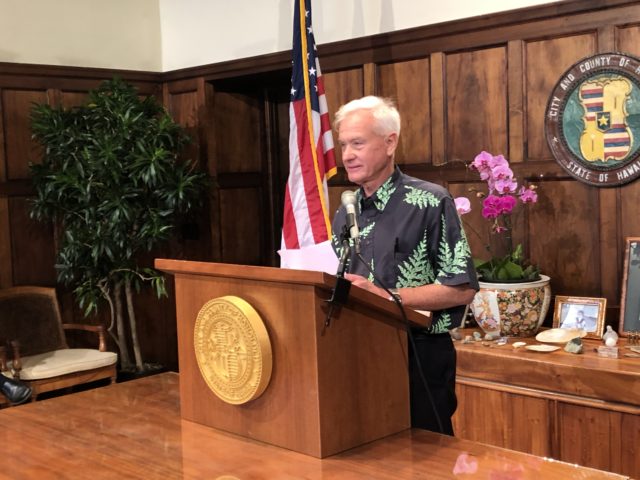 Although Caldwell provided few details about the letter, he did say it involves a $250,000 severance payment made to former Police Chief Louis Kealoha. The chief retired in February 2017 with his full retirement pension, benefits and the severance check, which he is required to repay if he is convicted of a felony within six years of retirement.

The former chief and his wife, Katherine Kealoha, were indicted in October 2017. They face federal trials for bank fraud and for an alleged conspiracy in which the couple allegedly used city resources and police officers to frame a relative who was engaged in a family dispute with the Kealohas over money.

Four Honolulu police officers have also been indicted. On Friday, one of them, Sgt. Daniel Sellers, pleaded guilty to a single misdemeanor count as part of a deal with federal prosecutors in exchange for all other charges against him being dropped. He’s also agreed to cooperate with a continuing FBI investigation into alleged corruption in the police department and the Honolulu city prosecutor’s office.

A fifth officer, Niall Silva, also pleaded guilty, in December 2016, and has been cooperating with federal investigators. 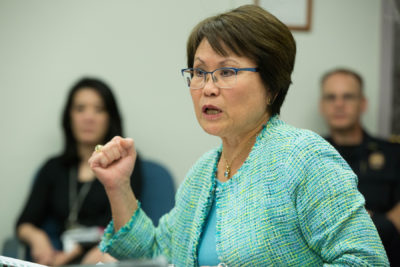 How the city’s severance payment to Kealoha is related to the broader case, and Leong’s role in it, is not apparent. Leong’s attorney, Lynn Panagakos, insisted her client will be exonerated. As the city’s attorneys, the corporation counsel’s office would have had a role in approving such a payout. And Panagakos decribed Leong’s role as routine.

“I believe the evidence will show that this payment was properly authorized and processed,” Panagakos said in a statement. “Ms. Leong’s involvement in this matter was within the course and scope of her duties as Corporation Counsel, and she performed her duties, as she always does, lawfully, conscientiously, and to the best of her ability.”

Caldwell said he didn’t know what about the payment concerned federal prosecutors.

But some have long questioned the payment. Although the statement notes the money was approved by the Honolulu Police Commission, the current commission chair, Loretta Sheehan, voted against approving it in 2017. And federal investigators took an interest in the $250,000 payment shortly after it was approved.

According to current commissioners Sheehan and Steve Levinson, former commission chair Max Sword told his colleagues that he and his attorney, Bill McCorriston, had met with the FBI to answer questions about the circumstances surrounding the payment.

Sword shared this information after a commission meeting and in private with no one else in the room, Sheehan and Levinson told Civil Beat last week. They said Sword also assured them that the commission was neither a subject nor target of the investigation. 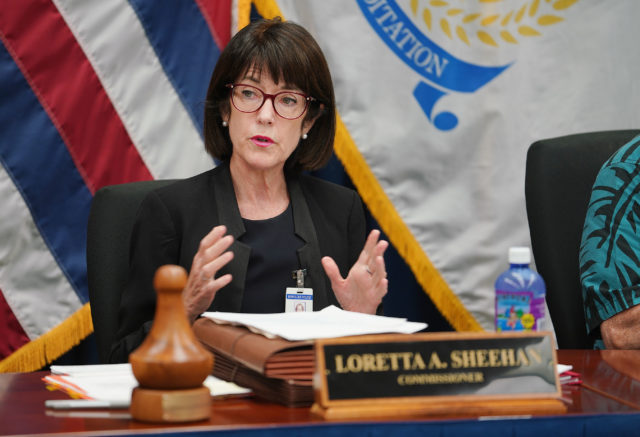 Sword and McCorriston did not return calls for comment.

Sheehan, a former federal prosecutor, said she remembers it as a brief conversation and one that didn’t seem to be concerning at the time, given Sword’s calm demeanor.

“I remember wondering what was up,” Sheehan said. “I wanted to know why the FBI was looking at chief Kealoha’s severance package because we had certainly never been informed by our lawyer Donna Leong that there was anything to be concerned about.”

Sheehan was the only member of the commission to vote against Kealoha’s severance package. She said it was negotiated in private by Sword and Leong. When it was presented to the commission, she said Leong described the $250,000 payout as a “take it or leave it” proposition.

“When we began to question the wisdom of the deal that Donna Leong and Max Sword had cut we were told by Ms. Leong that we were not going to negotiate it,” Sheehan said. “This was a take it or leave it deal, she said, so I left it.”

Levinson told Civil Beat he had the same recollections as Sheehan, both about Sword and McCorriston meeting with federal investigators and the $250,000 deal for Kealoha.

“We had nothing to do whatsoever with the negotiation of that agreement,” Levinson said. “We did not know what the terms of it were until we were asked to sign off on it.”

Levinson added that he voted to approve the payout because he felt it would cost less than getting sued by Kealoha had the commission decided to fire him.

He also said he was under no illusion that taxpayers would ever see the money again even if Kealoha was convicted.

The announcement comes just weeks after Katherine Kealoha’s former boss, Honolulu Prosecuting Attorney Keith Kaneshiro, also received a target letter. But the mayor’s announcement, made at a Honolulu Hale news conference, was a stark contrast to the way Kaneshiro has handled the matter. The prosecutor has refused to talk about the investigation targeting him.

Kaneshiro, whose office is not part of Caldwell’s administration, has cited the Federal Rules of Criminal Procedure to justify stonewalling – and staying on the job – even though the federal rules include nothing that would prohibit Kaneshiro from commenting about the investigation.