As next year’s planned interim rail service approaches, local officials still aren’t sure whether the transit system as designed will sap too much electricity from nearby homes and businesses when the trains accelerate.

Hawaiian Electric Co. and the Honolulu Authority for Rapid Transportation, which oversees rail construction, will study the power voltage swings caused by the driverless trains more closely in the coming months, both agencies say.

Depending on what those tests find along the elevated guideway, HECO could demand that the city install additional equipment to keep the voltage from fluctuating too severely whenever the trains leave the station.

“You don’t want a situation where one customer using a line … does it in a way that negatively impacts the voltage to a customer that is also sharing that line,” said Colton Ching, HECO’s senior vice president of planning and technology. 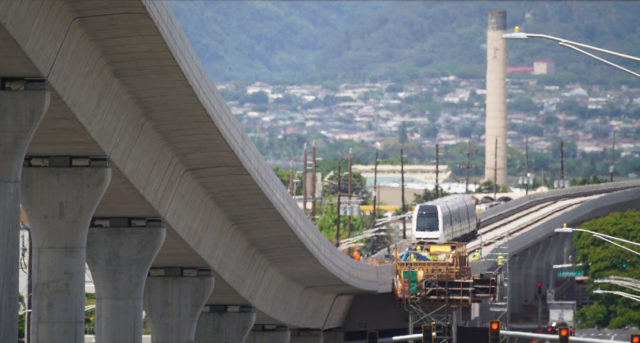 The driverless, four-car trains will need short bursts of power as they leave a station loaded with passengers, officials say.

The Oahu-based utility company remains concerned that the spikes could cause voltage to nearby customers to fluctuate by more than five percent, which is the limit set in its tariff rules. If the trains draw too much power as they speed up, it could affect the use of or even damage household appliances and other electrical-powered equipment, Ching said.

HART officials, meanwhile, aim to convince Ching and his HECO colleagues that the city doesn’t need to buy so-called static compensators, or “stat-coms,” to ease the strain of such voltage swings. The local rail agency has already seen rail costs climb about $4 billion on its watch and faces strong pressure to keep expenses in check.

HART says it can avoid causing severe voltage swings by staggering the trains’ departures. That way, they won’t suddenly suck too much power all at once.

“We understand HECO’s position, looking out for their customers and the safety of their personnel – everything along those lines,” said Sam Carnaggio, HART’s project director. “We have pretty reasonable discussions, and there are just points where we disagree.”

The trains will draw most of their electricity from existing HECO circuits, fed into 13 “traction” stations along the line that convert normal electrical service to power suitable to supply trains.

With their talks still underway, neither HART nor HECO was willing to discuss in recent interviews how much it would cost to buy and install stat-coms at those traction power stations.

Initially, Carnaggio said that HART wouldn’t have enough money to handle a worst-case scenario in which stat-coms would have to be installed at 12 of the 13 traction power stations. He later said “they would have to find it somewhere else” in the budget to avoid increasing rail’s total construction costs.

Overall, Carnaggio said he considers the prospect of adding stat-coms to the budget a risk to the project, although not a major one.

Indeed, the issue was not mentioned in a recent presentation to HART board members on the biggest risks now facing the project. Instead, HART officials flagged property acquisition along rail’s path as the top risk. 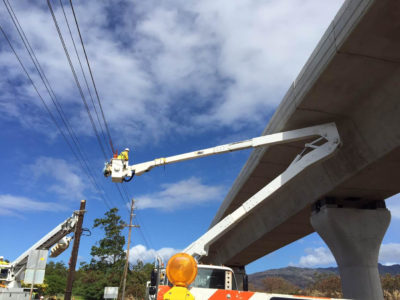 (Agency officials would not publicly state which properties pose the biggest risk during the presentation earlier this month. However, the city is poised to go to court next year after talks with Howard Hughes Corp. broke down to buy key rail parcels in Kakaako. The parties at one point were about $100 million apart, according to rail’s federal overseers.)

This isn’t the first time the island’s longtime utility company and the agency spending billions of dollars to carve a rail line through Oahu’s crowded southern shore have butted heads over rail’s impacts on power service.

HART and HECO wrangled for years over what to do about the utility line clearance issues along the elevated rail line. Notably, consultants had flagged the potential budget-busting issue as early as 2009 — but the discussion on how to resolve the situation went silent for years. Ultimately they reached a $70 million deal to purchase specialized trucks for HECO crews to access most of the west side lines, while relocating some others.

For the voltage issues, by contrast, both HART and HECO say they’ve stayed in contact since the issue arose several years ago.

Once rail opens for service, HECO expects the city’s 20-mile, 21-station rail line to be among its 10-largest customers in terms of demand, according to Ching. HART expects the rail system will initially require nearly 15 megawatts of power to operate the entire line, according to figures provided by HECO.

The U.S. Department of Defense and the state, with its collective agencies, are currently the top two customers, he said.