By Christina Jedra   / About 8 hours ago
Reading time: 9 minutes.

The one-bedroom unit attached to Ben Richards’ home was initially meant for his daughter’s grandparents.

When they visited from the mainland, the grandparents stayed close by on the Kaneohe property but still had their privacy. When they went home, the unit sat empty.

That changed 18 months ago when Richards and his wife Cristi listed the space on Airbnb. It was an easy way to offset mortgage costs, Richards said, and a great way to meet people from around the world. Pastries in Paradise, as it was advertised, was an old fashioned B&B. Cristi, a pastry chef, served breakfast every morning.

“Everyone says it’s the best visit to Hawaii they’ve ever had and they can’t wait to come back,” said Richards, who earned enough five-star reviews to reach Super Host status. 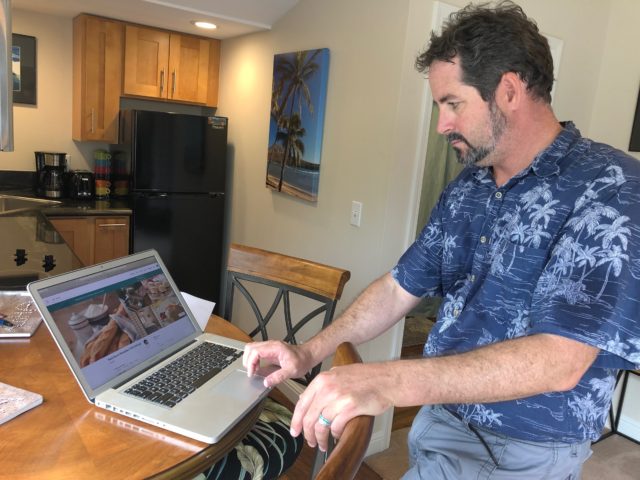 What the couple didn’t know until recently, Richards said, is that their Windward Coast vacation destination was illegal. In June, Mayor Kirk Caldwell signed Bill 89allowing the city to slap fines of up to $10,000 a day on people who advertise short-term rentals without a valid registration number. Enforcement started on Thursday. The Department of Planning and Permitting will issue registration numbers to 1,700 units but not until October 2020.

The timeline is forcing short-term rental operators to make tough decisions about their businesses. Should they rent to a long-term tenant, leave the unit empty except for friends and family or sell the property altogether?

The city is already noticing a change. DPP sent out letters to 5,000 properties suspected of running illegal vacation rentals. While hundreds of letter recipients said they were wrongly targeted by the city’s imprecise preliminary investigation, the city said on Thursday that the number of ads has dropped by 17.7 percent. Some operators have canceled their reservations and edited their postings to say “30-day minimum.”

Preliminary data suggests those short-term rentals may be converting to long-term leases or going up for sale. In Honolulu, there was a significant spike in long-term rental and home sale ads in July, the month after Bill 89 passed, according to Joshua Clark, a HotPads economist who looked at data from HotPads, Zillow and affiliated sites. The number of “for sale” postings in July was among the highest its been in four years, Clark said.

The influx of long-term lease and sale postings suggests the legislation is working as intended to reduce the number of tourists in residential neighborhoods and make units available to local residents, although HotPads noted correlation doesn’t necessarily mean causation.

It may be welcome news for Bill 89 advocates, but short-term rental operators say they and their customers feel a sense of loss. Georgietta Chock, who has rented out a floor of her Kaimuki home since last year, shut down her webpage. She said some of her would-be guests are changing their vacation destinations.

Things are also in flux for Kate Bliss, who has run a short-term rental out of the St. Louis Heights home she shares with her husband and his children.

“We really don’t know what we’re going do,” she said. “We wouldn’t be able to own without this.”

Like Richards, Bliss appreciated the flexibility of short-term renting. Her property includes two studios. One has had a long-term tenant, and Bliss liked having the other one available for friends and family from the mainland when she wasn’t hosting travelers. Bliss is leaning toward listing her property for more than a month at a time to comply with the law.

“We’ve enjoyed when we have guests longer than 30 days,” she said. “We invite them to dinner, take them hiking. We get to know them.”

Richards signed a long-term lease with a tenant this week. He deactivated his listing on Airbnb.

“Our plan right now is to convert the unit over to a long-term rental until we see what the ramifications of Bill 89 are and what happens in the next year or so,” he said. 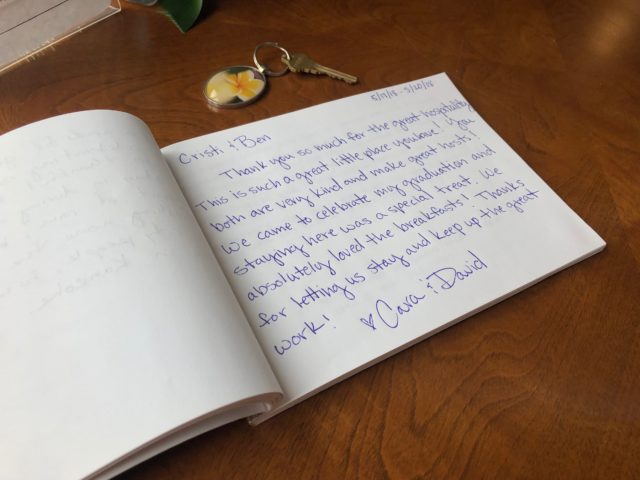 He hoped to get a city permit next year, but it’s no guarantee. Registered short-term rentals can’t be within 1,000 of each other, and they will be limited in number by region.

“It’s disappointing for a lot of us who were trying to operate within what we thought the legal constraints were and offer a high-quality product to people visiting Hawaii who don’t want to stay in a cookie-cutter hotel chain and want to experience more of true Hawaii,” Richards said.

Kailua resident Tina Reed purchased a Hauula studio three years ago and listed it on Airbnb at the suggestion of her realtor. She understood the arrangement to be legal, she said. Finding a long-term tenant interested in living a nearly hour-long drive from downtown – and at a price that will cover condo fees – is going to be tough, she said, and so is selling it.

She feels the city’s enforcement date came too quickly.

“If you make an investment, it’s always a risk,” she said. “My concern with this law is that people don’t have enough time to deal with having the rug pulled out from under them.”

‘They Lumped Us All Together’

Running a mini-hotel business in residentially zoned areas has been outlawed in Honolulu since the 1980s, but the Department of Planning and Permitting has failed to enforce its own rules. Catching an operator in the act of renting for less than 30 days required stakeouts of the property, which DPP hasn’t had the resources to do, officials said.

If the city wasn’t outright inviting short-term rentals, the lack of action sent a mixed signal to operators.

“It was unclear what was legal and what was not, what was enforced and what was not,” Richards said. Since Richards and his wife were paying general excise and transient accommodation taxes, they thought they were operating legally.

As Airbnb gained popularity worldwide in recent years, DPP estimated as many as 10,000 illegal vacation rentals popped up across Oahu. Residents say residential areas, particularly in Kailua and the North Shore, became flooded with tourists who are changing the fabric of communities and overwhelming infrastructure. Observers say the problem has been exacerbated by out-of-state investors who buy multiple properties and rent them out short-term, collecting much more money than could be earned through long-term leases.

When the city proposed legislation that would crack down on short-term rentals, the Richards and other mom-and-pop operators were pleased, thinking it wouldn’t apply to them.

“The initial reaction was that regulation was mainly focused on off-island investors that had properties that were solely used as short-term rentals, and properties that had an owner occupant who was renting out an ohana unit would be grandfathered in,” Richards said. 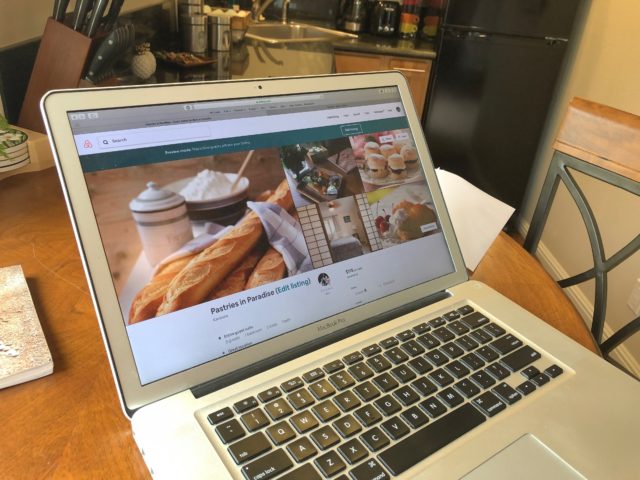 Chock also thought she would be exempt. She recalled City Council Chairman Ikaika Anderson told her in a public meeting that she was not the target of the law.

“Ikaika Anderson said: Mrs. Chock, I want to let you know the bill doesn’t affect you,” she said.

But it did. Bill 89 prohibits all advertisements for rentals less than 30 days except for units in resort zones and properties that have non-conforming use certificates from the 1980s, at least until next year.

City Council Communications Director Louise Kim McCoy said Anderson told Chock during a committee meeting that Bill 89 will allow owner-occupied short-term rentals like hers to apply for a permit.

“As Bill 89 indeed establishes a permitting process for owner-occupied short-term rentals, the chairman is correct that owner-occupants like Ms. Chock will be allowed to apply for permits,” she said.

Investors, Too, Say Their Financial Plans Are Derailed

Civil Beat spoke to two California-based investment property owners who are also debating how to proceed with their units, but they declined to speak on the record to avoid criticism. One owner said his entire retirement was invested in Oahu’s short-term rental market.

He believes he’ll lose money renting to long-term renters, but without a better option, that’s what he will do. The other owner also worries a long-term lease won’t cover his mortgage. In addition, he is concerned that if he opts to sell, he’ll be competing in a market flooded with other properties hit by the new law that no one will want to buy if they can’t rent the units short-term.

Caldwell says most of the short-term rentals on Oahu are owned by people who don’t live on the property, but rental operators dispute that. There is a lack of reliable data. Listings labeled as whole-home rentals on Airbnb may have the appearance of an investment property, but in many cases, they are ohana units or dwellings attached to a host’s home that have private entrances.

“There’s a lot of other people in my situation that live on the premises,” Chock said. “They lumped us all together.”

The Hawaii Tourism Authority said it’s too soon to analyze data on the effects of Bill 89, but Chock feels it’s bad for tourism.

For Richards, having a long-term tenant won’t be so bad, he said. While the unit will gross less income per month, he and his wife will save on the expenses of running their Airbnb, including taxes, buying breakfast food for guests and maintaining the unit.

“Maybe this ends up working better for us,” he said. “And my parents will end up staying in the living room.”