Walking the sidewalk in Waikiki sometimes calls for the agility of a longboard noserider.

The passable portion of the concrete strip tapers to a width of 3 feet where there are obstructions, such as potholes, homeless people, construction cones and bulky displays stuffed with tourism brochures.

Even outwardly pedestrian-friendly features like shade trees and benches put a squeeze on the navigable walking space for people in wheelchairs or with walkers who can’t so easily hopscotch between hazards. 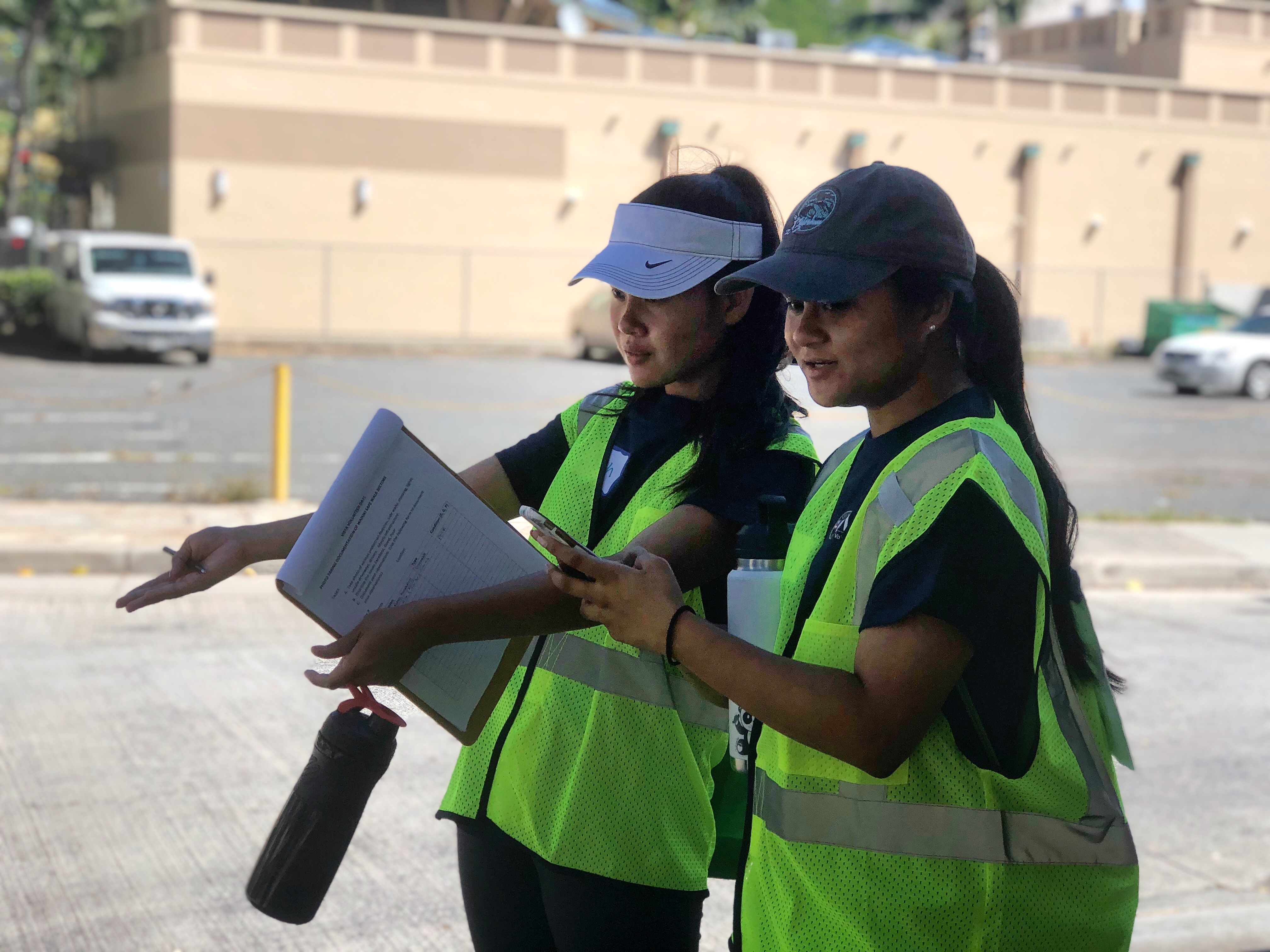 Then there’s those unsightly utility boxes.

“They are rusty and ugly and dirty and look like if you touch it you’ll get a disease,” said Denise Pierson, service learning coordinator at Kapiolani Community College.

One of their observations: Crossing the street can be an unwelcome test of endurance for slower-moving pedestrians, such as people in wheelchairs or parents pushing baby strollers, who must race against the crosswalk countdown timer.

“Are they going to make it?” exclaimed volunteer Jireh Mendoza, as she watched an older man with a walker who was still shuffling down the crosswalk when the traffic light turned green.

Dubbed Waikiki Safe Walk, the hunt for hazards was the second street audit conducted by the group since April, when about 70 volunteers surveyed the city’s streets.

Threats to pedestrian safety photographed in the latest survey have already been added to a public map that organizers hope will lead to city workers making improvements and repairs. Anyone can contribute to the map by photographing uneven sidewalks and other faulty infrastructure and uploading it to the map through a smartphone app.

The initiative, which has numerous sponsors, is focused on Waikiki, where about 30% of the resident population is 55 or older.

“Our seniors constantly complain about the safety of sidewalks in Waikiki,” said Merle O’Neill, program director at the Waikiki Community Center. “The theory is that if you make it senior-friendly, everybody else will benefit. So it’s about making Waikiki safe, making it beautiful and making it accessible to everyone.”

The need for improved safety protections for pedestrians is indisputable. In 2018, 44 pedestrians, including 27 on Oahu, were killed statewide — an alarming rise from the 15 killed the previous year. In recent years Hawaii has led the nation in senior pedestrian deaths per capita. 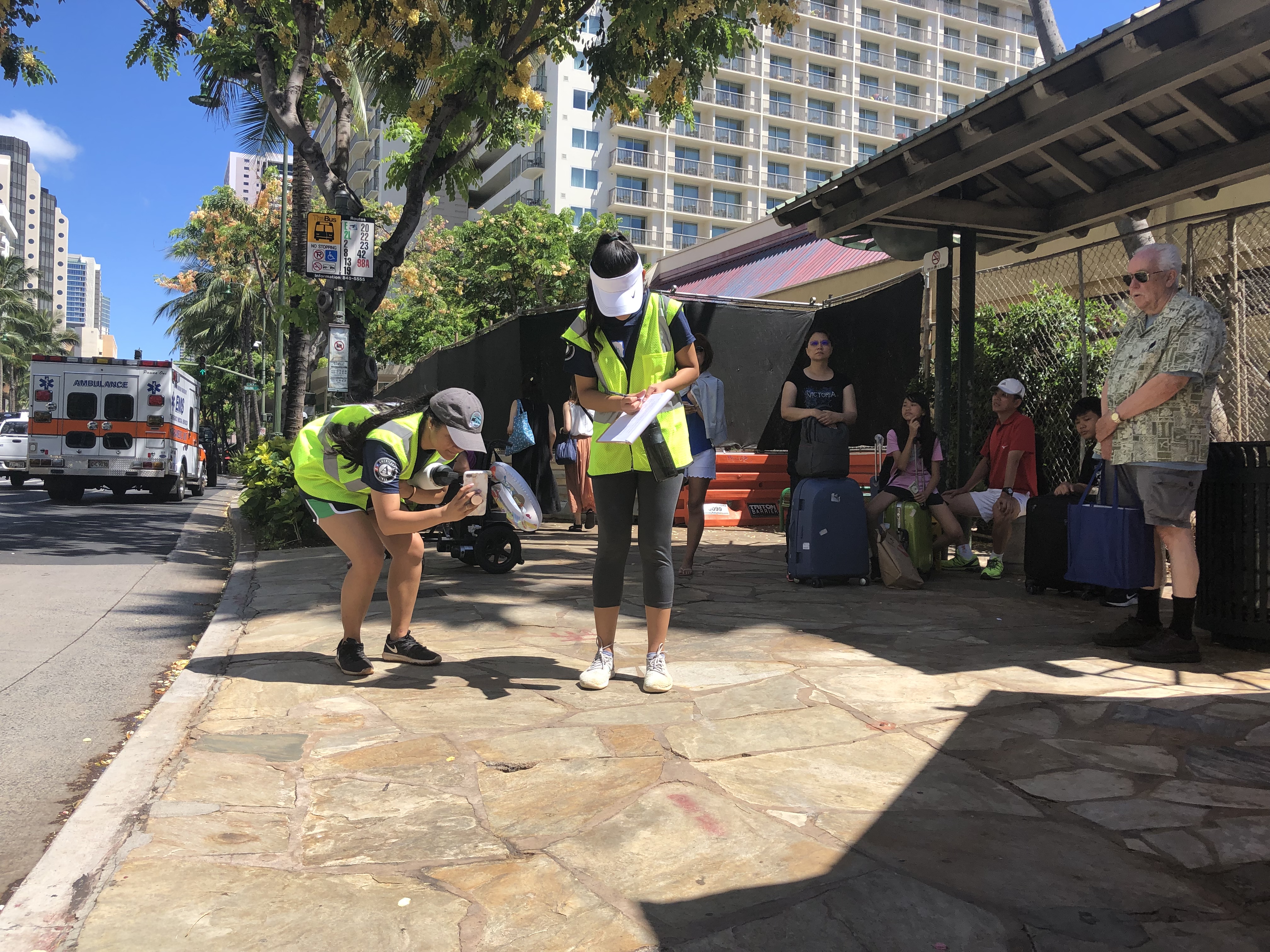 “It’s like you don’t notice it,” said volunteer Mary Janell Murro, 21, of Kalihi. “You find ways to work around the obstacles — if you’re able to. One thing I noticed is in Waikiki there are a lot of people who need more accessibility. I never noticed before how many people have walkers and how many homeless are in wheelchairs.”

“The sidewalks are skinny,” she said. “I don’t think this city was built to accommodate millions of people.”

The project is already inspiring action. The Waikiki Community Center and the Waikiki Improvement Association are teaming up to enlist local artists to beautify those unsightly utility boxes with art.

Next up: A pedestrian safety awareness campaign.

Meanwhile, O’Neill said she and other organizers will continue to prod city officials to address the pedestrian hazards documented on the map.

“One of the things that we’re trying to communicate to our seniors is that when you complain and verify the complaint, we will listen to you and we will do something about it,” O’Neill said.