(CNN)Thanksgiving is a time for feasting, certainly not fasting or dieting. But if you’re kicking off the holiday season with your health in mind, there are a few smart switches you can make on Turkey Day that will help boost your nutrition and lighten your calorie load.

Below are some savvy substitutions that can help you save nearly 1,200 calories for the entire meal.

Red wine instead of White Russian

Calories in cocktails can add up quickly, thanks to sugary mixers, tonic, juice, soda and syrups. What’s more, depending on the pour, mixed drinks may contain more than one serving of alcohol (that is, more than 1.5 ounces of vodka or gin), which also boosts calories.
An 8-ounce White Russian can top 500 calories, thanks to Kahlúa, vodka and heavy cream, but a 5-ounce glass of red wine has about 125 calories, or about a quarter of the amount. If you prefer the higher-calorie cocktails, limit yourself to one.

Carrots and hummus instead of cheese and crackers

A couple of multigrain crackers with cheddar cheese has 134 calories — not calorie overload, but compare that with two baby carrots with 2 tablespoons of hummus, which has only 62 calories, plus 2 grams of fiber.
You can have double the portion for fewer calories if you choose crudité over cheese. If you prefer dips to hummus, try substituting Greek yogurt for sour cream to shave calories and boost protein. 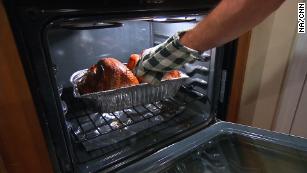 Dark-meat turkey without skin instead of with skin

There’s no need to forgo dark meat this Thanksgiving. But skip the skin to save some calories and saturated fat. Dark meat with skin is 175 calories per 3-ounce serving, and without skin is 147 calories. For portion control, keep your serving to 3 ounces, which is similar in size to a deck of cards or a computer mouse.

Turkey may not seem like “turkey” without gravy, as the sauce gives a flavor upgrade to any dish. But making your gravy with mushrooms instead of meat drippings. can give your bird a savory “umami” flavor while saving a significant amount of calories and fat.

Traditional gravy is 63 calories per quarter-cup, and vegan mushroom gravy is only 35 calories. And here’s another bonus to mushroom gravy: Because it is meatless, it’s suitable for vegan guests. Whatever gravy you choose, try using a tablespoon when serving yourself, instead of pouring from a gravy boat, to help control your portion size. 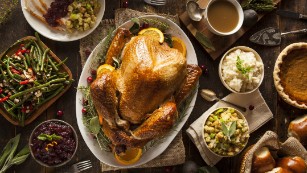 How long can you eat those leftovers?

Whole-grain stuffing with kale instead of traditional stuffing

Stuffing is delicious, but using white bread as an ingredient is a missed nutritional opportunity, as it doesn’t offer the fiber and vitamins that whole-grain bread does. Try a stuffing made with whole wheat bread, oats or quinoa to boost the nutrients.
The New York Times’ whole-grain stuffing with kale, figs, dates and hazelnuts has 7 grams of fiber and about 60 fewer calories per serving than a traditional stuffing. Traditional stuffing is about 420 calories per cup, while whole-grain stuffing with kale and dried fruit is 357 calories.

Sweet potatoes are nutritious and delicious and can help you achieve smooth, glowing skin, as they are loaded with vitamin A. However, when you add brown sugar, butter and marshmallows, you’re pretty much eating dessert.
One serving of candied sweet potato casserole with marshmallows packs 405 calories, 19 grams of fat and 32 grams of sugar. A whole baked sweet potato has only 130 calories and only 9 grams of natural sugar. You can even add some toasted marshmallows for an extra 30 calories. 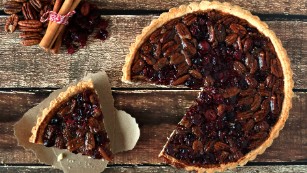 Where Thanksgiving calories hide — and how to burn them off

Traditional green bean casserole is a Thanksgiving staple that is about 24 calories per cup, but the healthier eatingwell.com version with breadcrumbs instead of French fried onions has only 188 calories per cup.
If you like the traditional green bean casserole recipe, you can use fresher, lower-fat ingredients that will improve the healthfulness of the dish and the flavor. Simply substitute the French fried onions with fresh onions (you can bake them after soaking them in buttermilk and coating with breadcrumbs and flour), and use low-fat condensed cream of mushroom soup instead of the regular version. You can also substitute low-fat milk (like 1%) for whole milk, which saves calories and saturated fat.

Pumpkin pie instead of pecan pie

There’s no need to skip dessert, but by choosing pumpkin pie over pecan pie, you can save over 200 calories. Pecan pie is about 541 calories per slice, and pumpkin is 323 calories. Apple pie is another lower-calorie choice compared with pecan, at 363 calories per slice. If you can’t resist pecan pie (and who could blame you), take a thin slice, or go crustless and eat only the filling. And hold off on the whipped cream!
Get CNN Health’s weekly newsletter
Sign up here to get The Results Are In with Dr. Sanjay Gupta every Tuesday from the CNN Health team.
Make all these substitutes, and your total calorie savings is 1,179. Hopefully, you won’t miss anything from your 2,546-calorie traditional feast as you enjoy a traditional, simple, delicious 1,367-calorie Thanksgiving dinner.

Lisa Drayer is a nutritionist, an author and a CNN health and nutrition contributor.