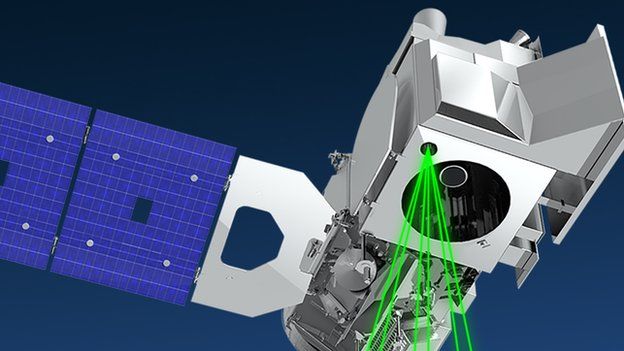 The American space agency has launched a laser into orbit to measure the condition of Earth’s ice cover.

The satellite mission, called ICESat-2, should provide more precise information on how these frozen surfaces are being affected by global warming.

Antarctica, Greenland and the ice floating on the Arctic Ocean have all lost volume in recent decades.

ICESat-2 will track ongoing change in unprecedented detail from its vantage point some 500km above the planet.

The satellite was taken up by a Delta II rocket, flying out of Vandenberg Air Force Base in California.

As the name suggests, ICESat-2 is a follow-on project. The original spacecraft flew in the 2000s and pioneered the laser measurement of the height of polar glaciers and sea-ice from space. But the mission was plagued by technical problems that limited its observations to just a couple of months in every year.

Nasa has since re-modelled the technology, both to make it more reliable and to give it a sharper view.

“ICESat-2 is going to observe the cryosphere with a spatial resolution at the level we have never seen before from space,” explained Prof Helen Fricker from the Scripps Institution of Oceanography.

“The beam is split across-track into six – three pairs – so we can map more of the ice surface as well as estimating the surface slope, which can confuse our interpretation of height changes.

“The orbit reaches to two degrees of the poles, and the same ground tracks are sampled every three months, giving us seasonal snapshots of ice height. From these data we can unravel the processes responsible for the ice loss in the polar regions,” she told BBC News.

Why is this mission important?

Antarctica and Greenland lose billions of tonnes of ice every year – the result largely of warm water being able to melt land glaciers where they meet the ocean. This wastage is slowly but surely pushing up sea-levels worldwide.

In the Arctic, the seasonal floes have also been in retreat. Sea-ice in the far north is thought to have lost two-thirds of its volume since the 1980s. And although this has no direct impact on the height of the oceans, the reduced ice-cover is working to amplify temperature rises in the region.

Much of the change that is occurring at the poles can present itself in quite subtle ways, says Dr Tom Neumann, Nasa’s ICESat-2 deputy project scientist, and a very precise tool is needed to characterise it properly.

“An elevation change of just a centimetre over an ice sheet the scale of Antarctica represents a tremendous amount of water either gained to or lost by the ice sheet. 140 gigatonnes worth.”