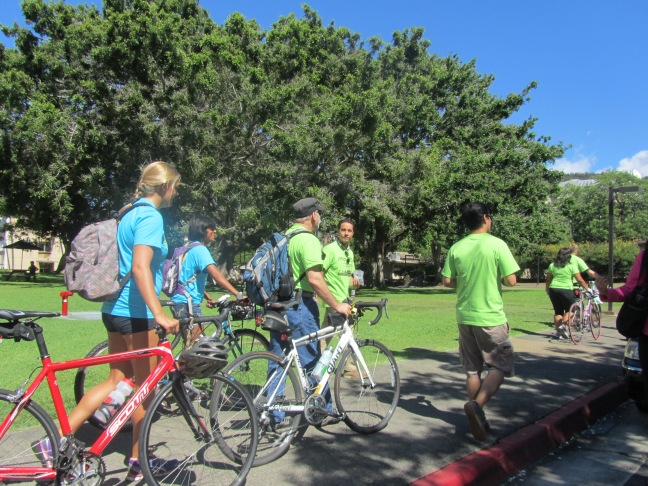 Major changes are in store for Kamehameha IV Road in Kalihi.

The project is part of the city’s Complete Streets initiative and calls for one lane in each direction with a center turn lane and bike lanes, with a goal to maintain on-street parking.

“This is to make sure that people drive a little more safely, a little more carefully,” Caldwell said. “On both sides of the street, there will be a striped bike lane so people can ride. It’s going to be a clear white line.”

Caldwell was joined by the directors of the departments of Design and Construction and Transportation Services, representatives of the Honolulu City Council, Neighborhood Board members, nearby school administrators, and officials from Kokua Kalihi Valley, KVIBE Kalihi Valley Instructional Bike Exchange, BikeShare Hawaii, the Hawaii Bicycling League, and others.

The Honolulu City Council adopted a Complete Streets ordinance in 2012.

Past projects include Waialae Avenue, which was changed to include bike lanes, or sharrows, running the full length of the road on both sides, from St. Louis Drive to 17th Avenue.

“On Waialae, the bikers love it,” said Mike Formby, city transportation services director. “I have to admit, there is a little bit of an issue with drivers trying to get used to the bike lanes, but as a Complete Streets project, it’s very successful.”

In Aiea, the project can be seen on Ulune Street, which went on a so-called “diet” with a narrow lane meant to slow traffic.

It’s a bit tricky for those who have to learn the three steps for backing into a stall. Still, firefighters stationed there say they haven’t seen any accidents, and it is working for nearby Aiea High School.

“The community appreciates the fact that there is additional parking and it slows down the traffic for our students coming to and from school,” said principal Kim Sanders.

Work is expected to start in April.