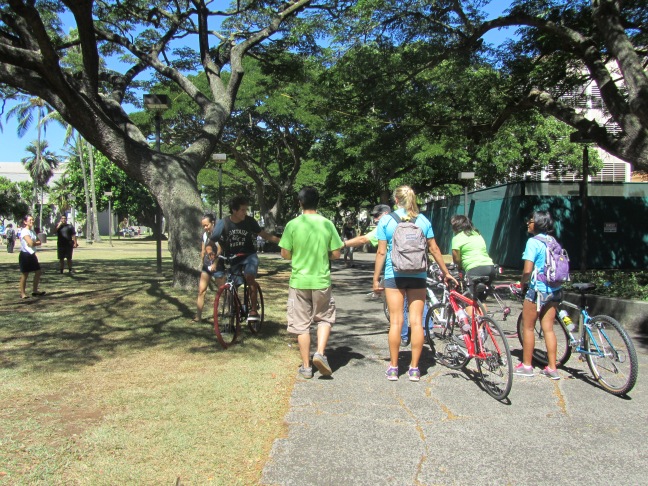 The Kalihi community spoke out and the city listened. As Honolulu Mayor Kirk Caldwell unveiled plans to make Kamehameha IV Road safer for pedestrians and bicyclists.

The busy roadway is a mix of bicyclists, pedestrians and vehicles, but will soon be narrowed down to just two lanes with an additional left turn lane in the middle and a bike lane on each side.

“I’m so happy everyone will come and make our own bike route and make this place much safer,” said Josiah Nerro, 5th grader, Ka’ewai Elementary School.

“I’m also happy because when bikes will come sometimes they’ll get hurt on the road or something. I’m so glad we can have lanes for bikes so we won’t get hurt,” said Isabella Aquino, 5th grader at Ka’ewai Elementary School.

It’s something the entire community wanted. Last November they held a rally asking the city to create a safer street as they have in a few other communities.

Kamehameha IV Road was all set for repaving when the city heard the pleas from the Kalihi community and took time out and came up with the newer, safer design.

The Mayor says he won’t be surprised to see complete streets coming to other Oahu neighborhoods.

“I think so because more and people are very concerned. Part of it there’s more traffic. Everybody is in a big hurry to get home or get to work,” said Caldwell. “We don’t want to keep injuring or killing our pedestrians.”

“Anything we can do to save lives and protect people because it’s not just the person who gets hurt, it’s the person who does the hurting too their lives are changed forever,” Caldwell added.

Redesign work is being done. The project should be completed by the end of the year.